If you recall, we had logged the back of our property in order to begin raising our own grass fed beef.  By March we had a lush pasture growing and 2 cow/calf pairs waiting to come to their new home.  The day we made the deal on the cattle Tim decided we had to have some hay to feed in addition to the fresh grass.  So he found a farmer selling hay and took off with the car trailer hitched to his truck.

I didn't go with him because I was busy packing for my trip to California in the wee hours of the morning.

When he got home, after loading a ton of hay on the trailer, he began to unload it.  I brought my camera outside to snap some pictures because the chickens were jumping up on the bales to investigate.

Tim kept complaining of heartburn and I went inside several times to get him different medications to help.  Nothing seemed to be working, and after 18 bales he sat down on the side of the trailer and said the heartburn was killing him.  That's when I saw the beads of sweat on his forehead and noticed he just didn't look right .  There was no color in his face at all and his forehead was cold to the touch. I realized this was not heartburn and I needed to get help.

We live almost on top of the fire station so I just loaded him in my car and took off.  I started praying. It was Sunday, and we were blessed that there happened to be two of the best Paramedics in house at that moment, although they had not both been scheduled.

After getting him hooked up to the monitors and giving him needed meds, they determined that he would not make it to the hospital via ambulance.  He didn't have enough time left.  I prayed harder.

They called for transport and soon the Life Flight helicopter landed in the field across the street.  He was quickly loaded and lifted off.  I kept praying.

My neighbors took me to the hospital and it took us an hour to get there because of traffic and distance.  We have a closer hospital, but the best cardiac care was a good distance away.  I was shivering and in shock.  I prayed.

In the ER Tim had an amnesia event, due to shock and stress most likely, and could not remember anything or anyone except me.  It was very frightening because the doctors thought he may have had a stroke too.  They took him away again.  This time for a brain scan.  He was scared.  I prayed.

By the time he was wheeled back to the ER, his memory was fine.  The episode had passed and there was no sign of a stroke.  I praised and prayed.

Once they got him stable he was doing well enough that they decided to wait until the next morning to go into his arteries and look for blockages.  I prayed.

Tim didn't want me to stay at the hospital all night because of the dogs.  So my neighbors, who were still there with me, took me home.  When we got there we saw that our other neighbor had come over and unloaded and stacked all of the hay and he had put the trailer and truck away and hid the keys for us.  Again  I praised and prayed.

The next morning while Tim was in the Cardio cath lab having the angiogram I waited and I prayed.

During all this stress I repeatedly had someone - EMT or Chaplain, or friend - gently touch my arm or shoulder.  The hands that kept me sane. The calming touch of a caring persons hand can mean the difference between holding it all together and losing it completely.  The human touch of compassion from mostly strangers was extraordinary.  I prayed for each and every one of those hands and thanked God for them.

The doctors found that Tim had four blockages.  All at close to 98%.  He barely avoided open heart surgery because the worst blockage wouldn't open for the stent placement.  He ended up having another heart attack on the table during the procedure, but once the stent was placed his heart calmed down.

He ended up with four stents and a new lease on life.  He went into that hospital a pack a day smoker, and came out a non-smoker.  He hasn't changed all of his bad habits, like junk food, but he never smoked again.  I still praise God for that!

Needless to say, that trip to California didn't happen until 30 days later. Fortunately I had purchased the insurance when I bought my ticket, so the purchase price was refunded to me.

Our story is not over yet.  We did get those cows, he did build a wonderful barn, there have been tons and tons of hay since then, and we have moved to a new website.  I don't post often because I am too dang busy, but if you would like to visit us we would be honored.  You can find us at www.dangblessedfarm.com. 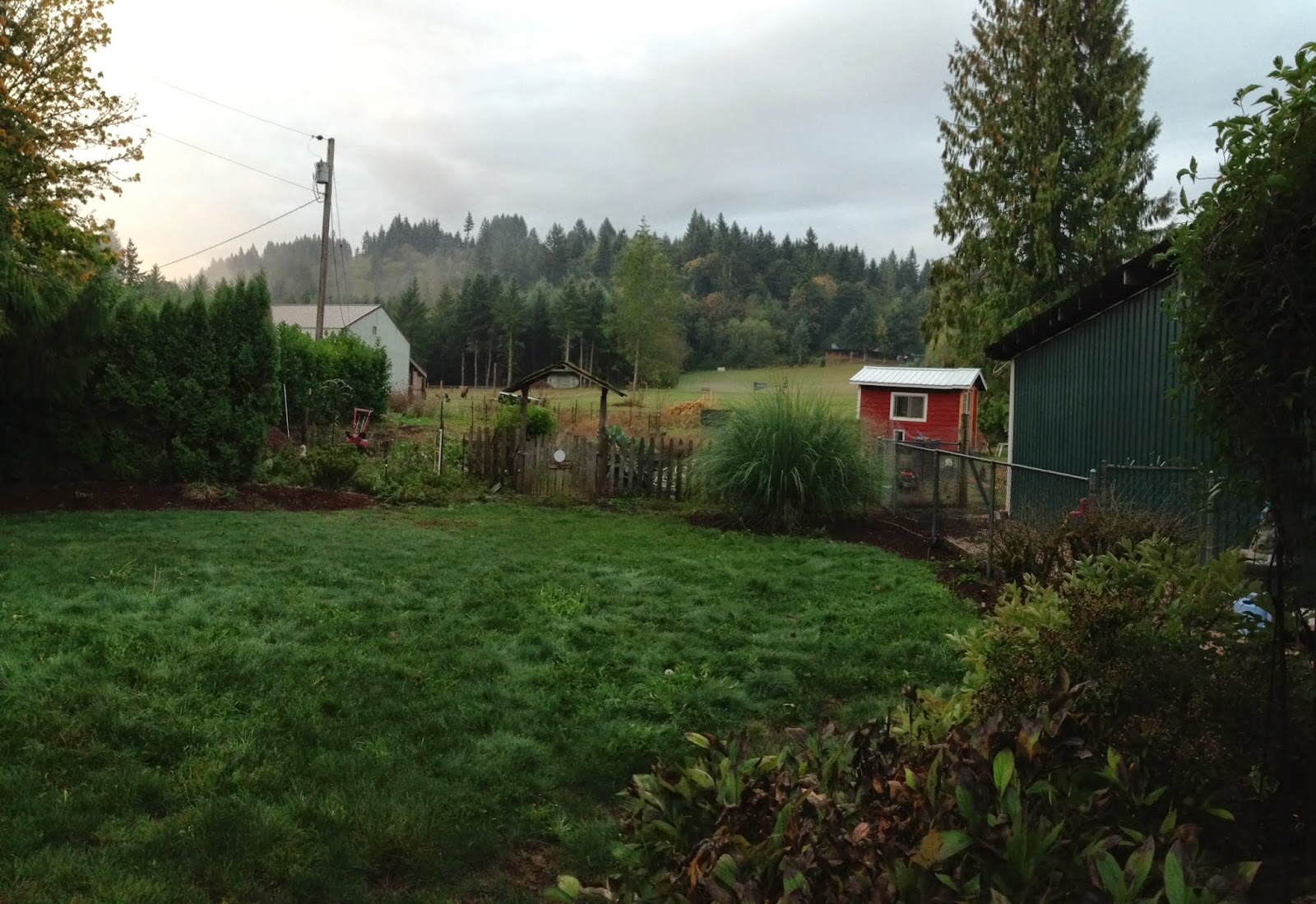 Beyond the little red hen house the new pasture is filling in nicely. Someday soon the fence will be strung and new gates installed. Thank goodness those things are paid for because the roof on our house is leaking and we have no idea yet if it will need to be replaced.  *sigh*

I hope you are all staying dry this winter.

Red
Posted by Red Woman at 4:30 PM No comments:

I Have a Yellow Submarine 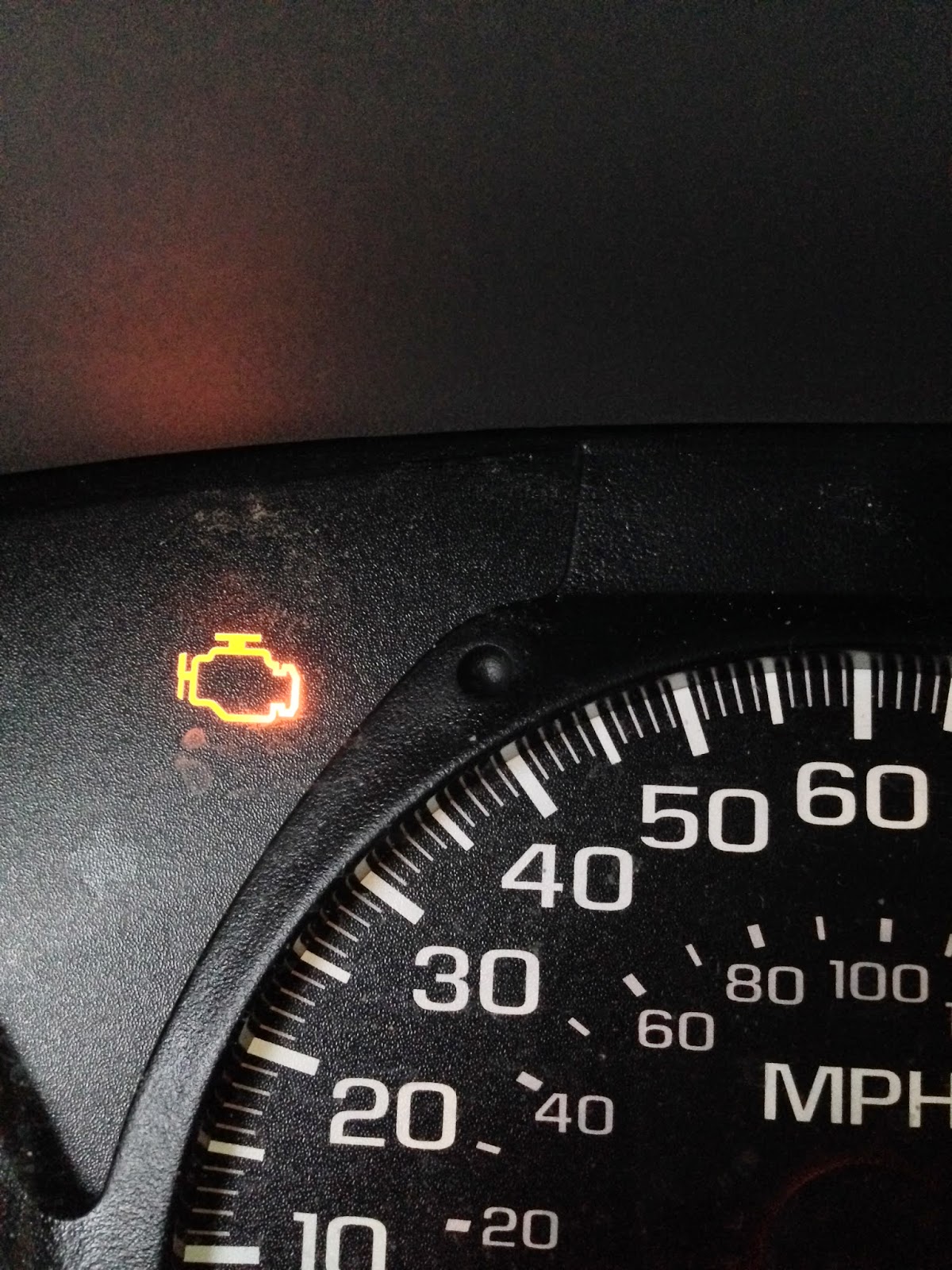 Isn't it cute?  Wonder why they put it there... Must be a GM thing.

Okay, okay, I know what it is - NOW.  But when it first appeared I had no clue.  I called my husband (the Master Mechanic) and told him a light came on in my car.  When he asked me what it looked like I told him a yellow submarine.   He had no idea what I was talking about.  Later he informed me that what I was looking at was an engine, not a submarine, and that was my "check engine" light.  Are you kidding me?  What happened to the words "check engine"????
Oh well, I still think it's cute. Unless of course it costs me a bunch of money to get rid of it!

Where On Earth Have I Been?

All these long months I have been wanting to blog again, but where do you start when you've been gone for so long?  Finally I decided to just start.  So here I am!
Our logging operation finished last summer, leaving us with a nice stack of firewood. (About 16 cords.) 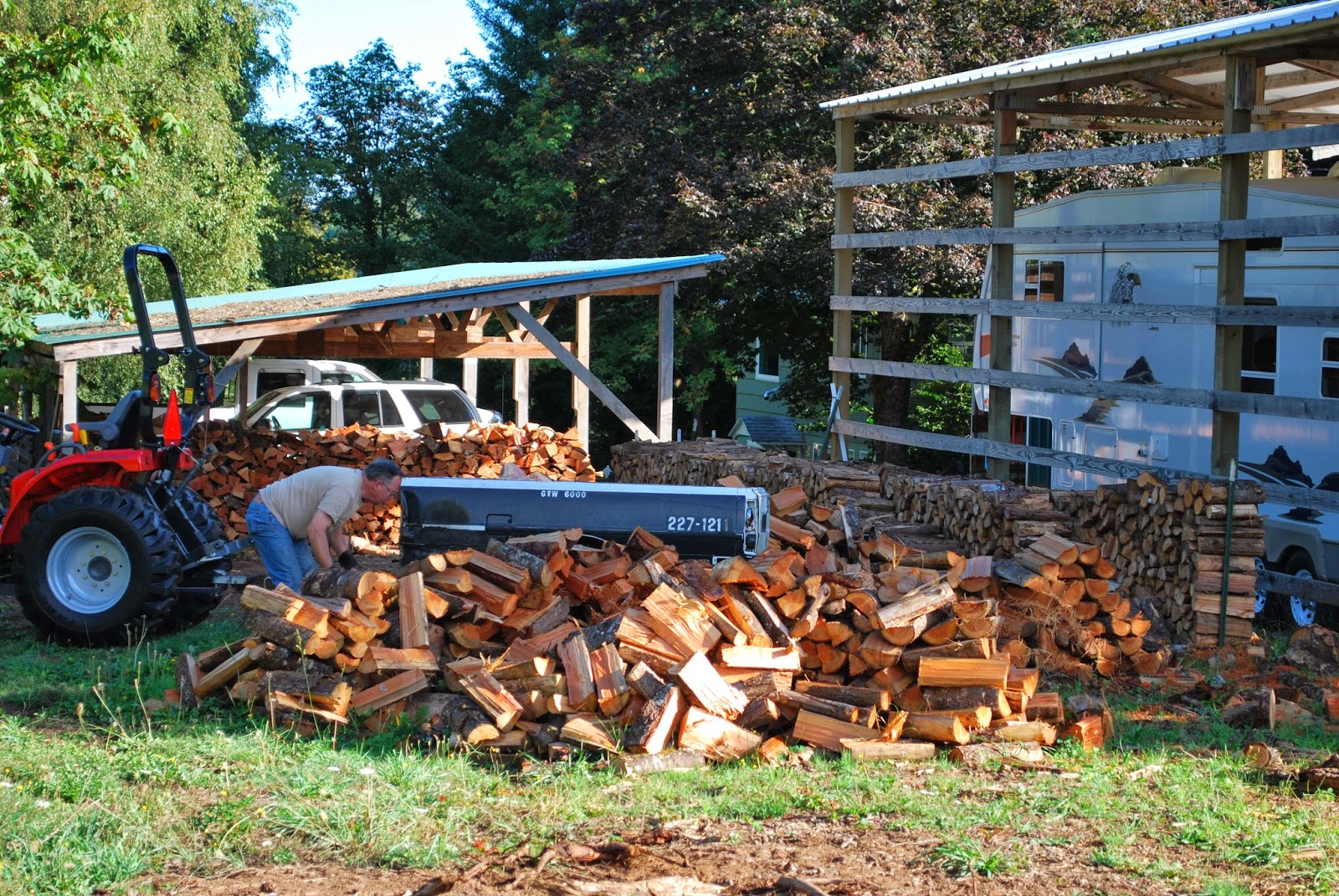 We ended up with three very large slash piles to burn, but could not begin the burn until almost Christmas because of the fire danger.  The neighbors were very patient, but quite relieved when the smoke finally died down.  We had one pile that smoldered for 3 months.  Every time we thought the rain had doused it, there would be a curl of smoke coming out of the top like a volcano. 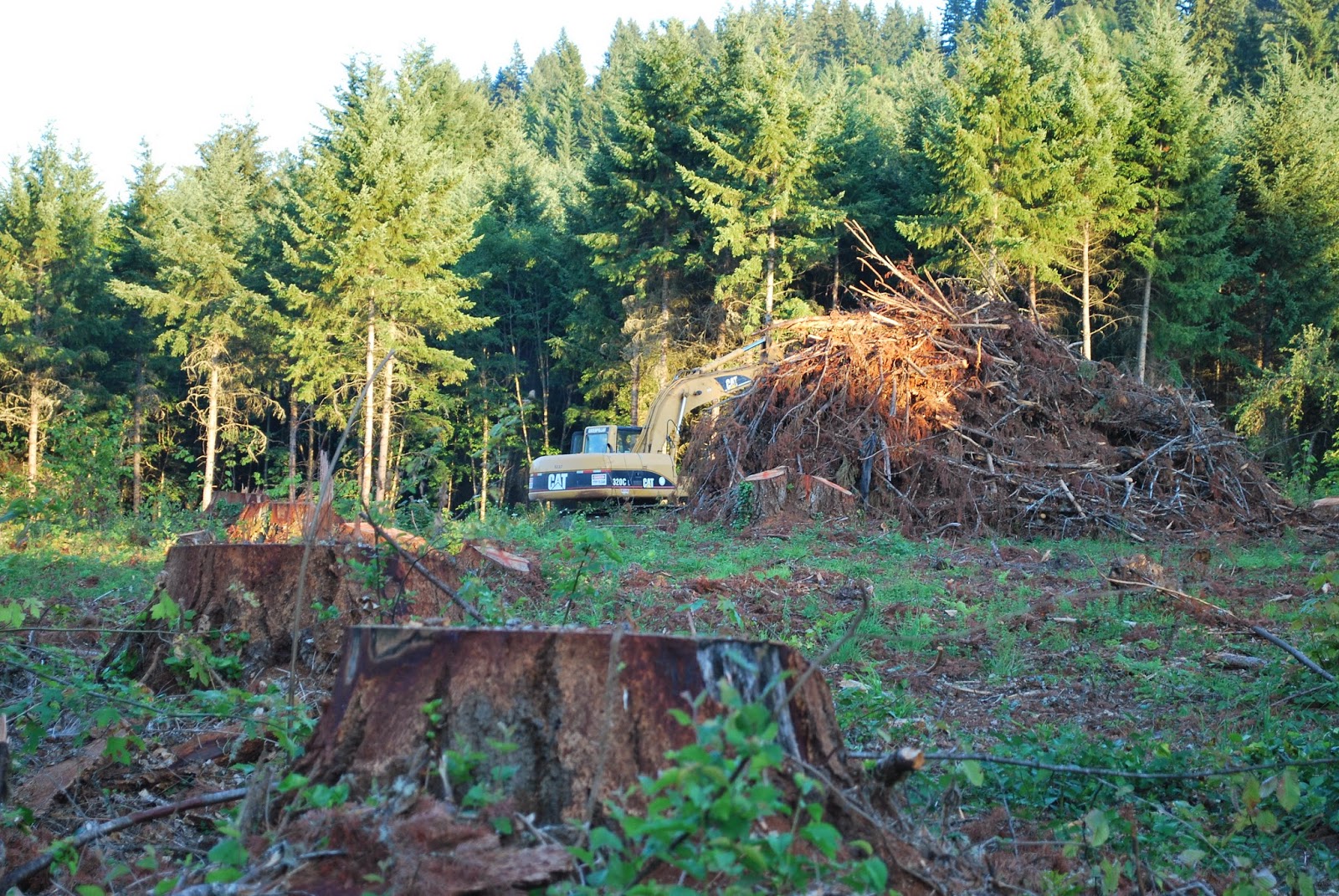 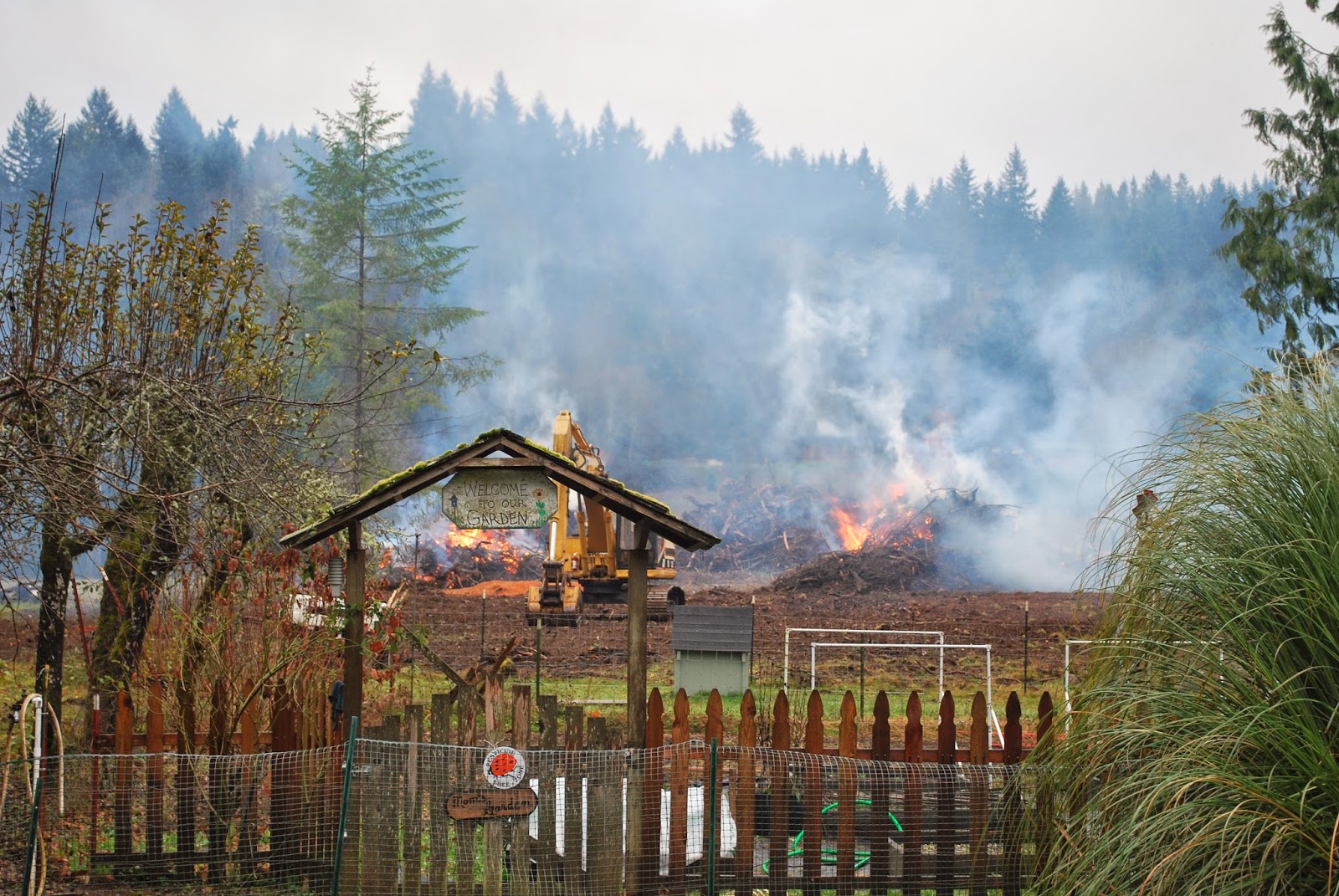 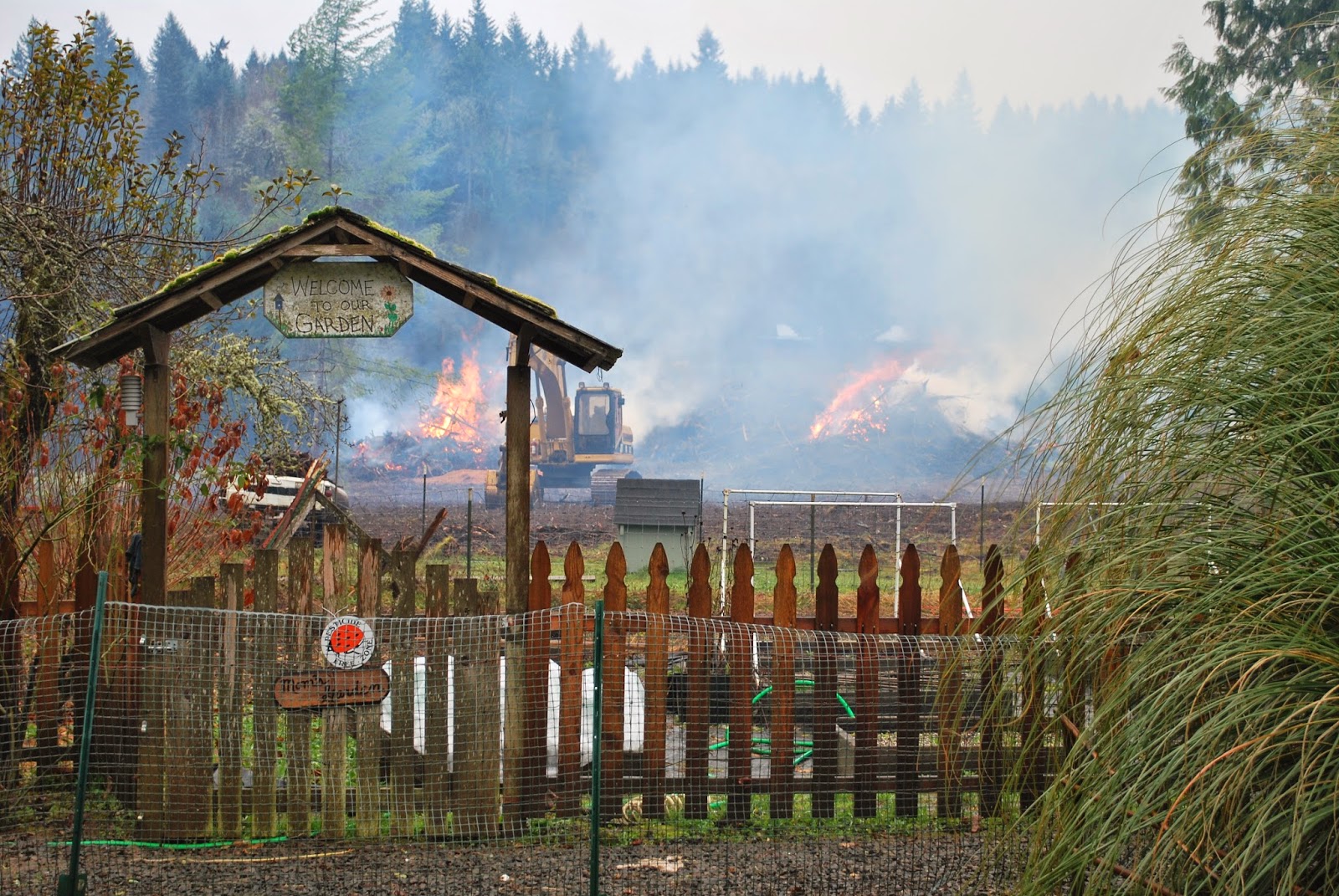 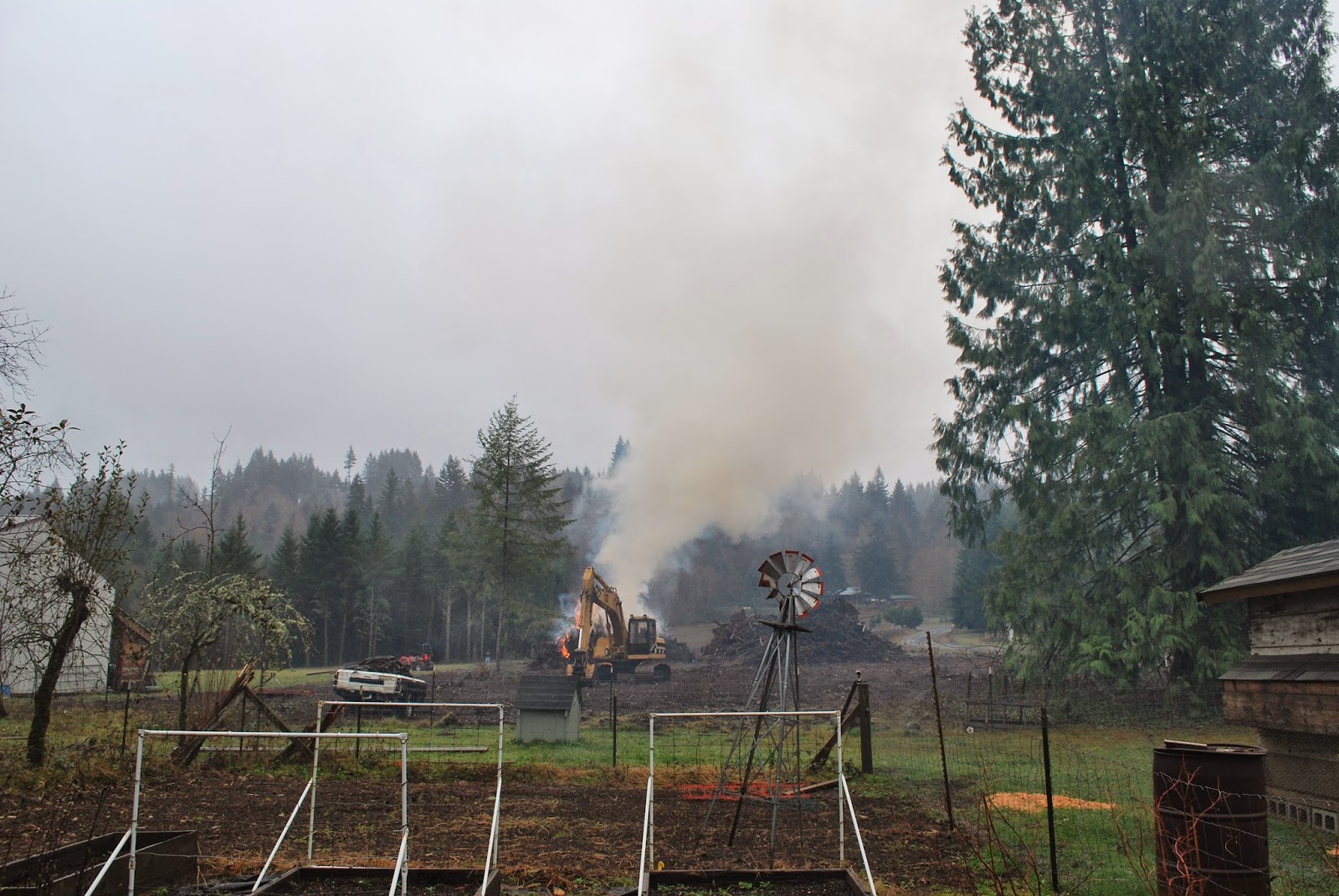 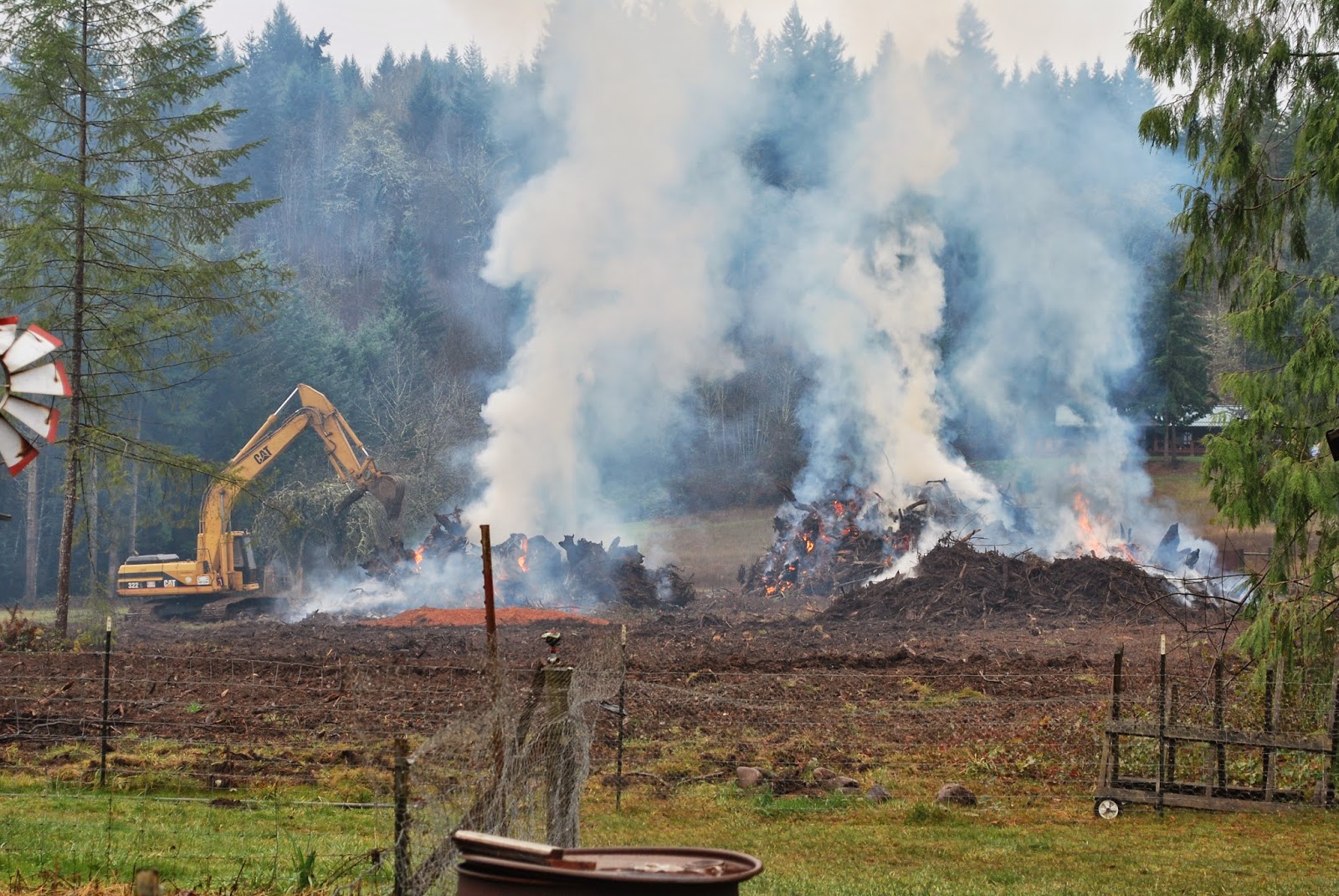 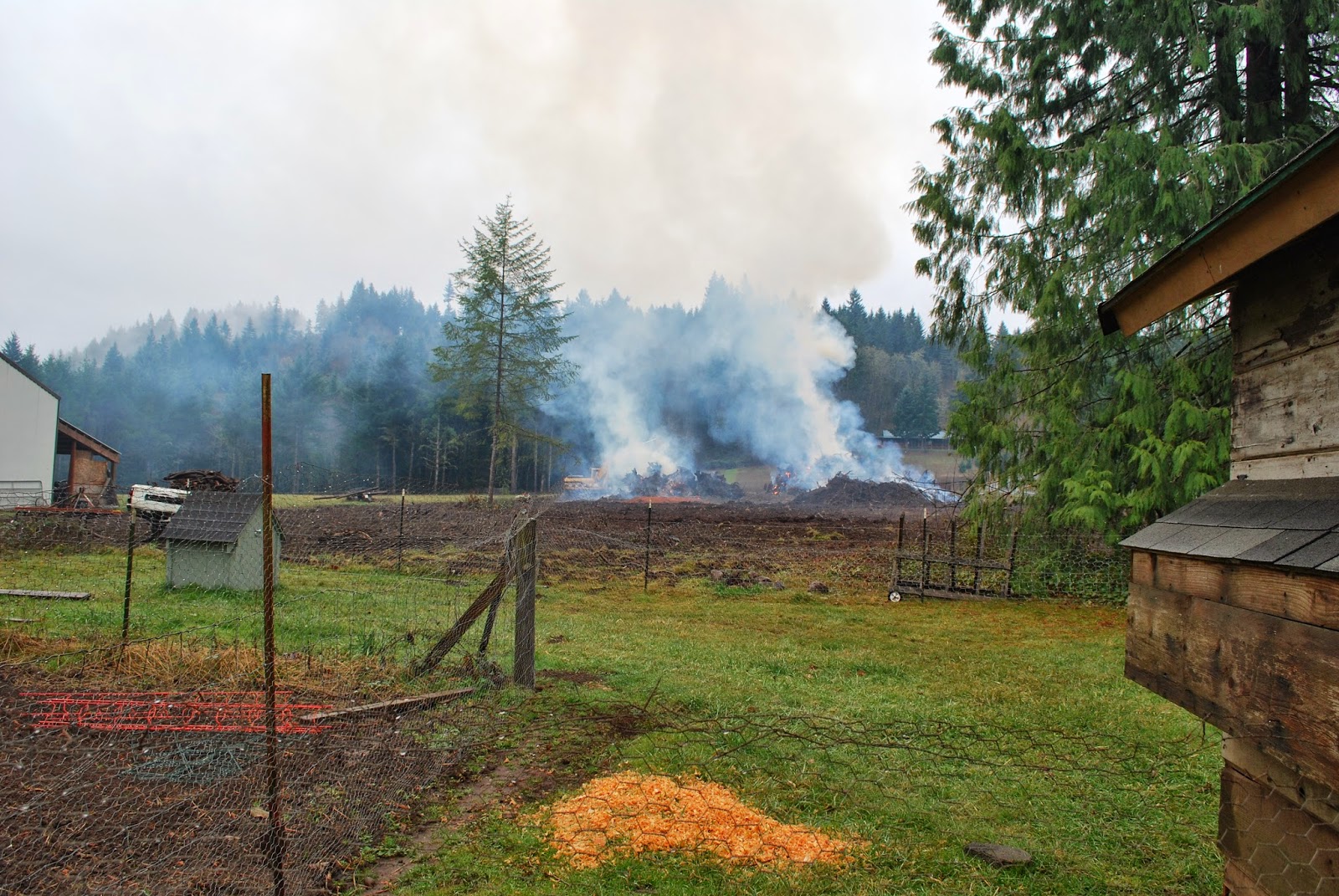 ﻿
Then the red sofa and pink chairs that I brought home from my Mothers house, became the blue sofa and  yellow chairs, complete with a new yellow rug.  Mothers furniture was beautiful in her large house, but putting all of it into my limited space required a more peaceful color scheme.  I'm partial to blue and yellow because of the many months of gray skies in Oregon.
﻿ 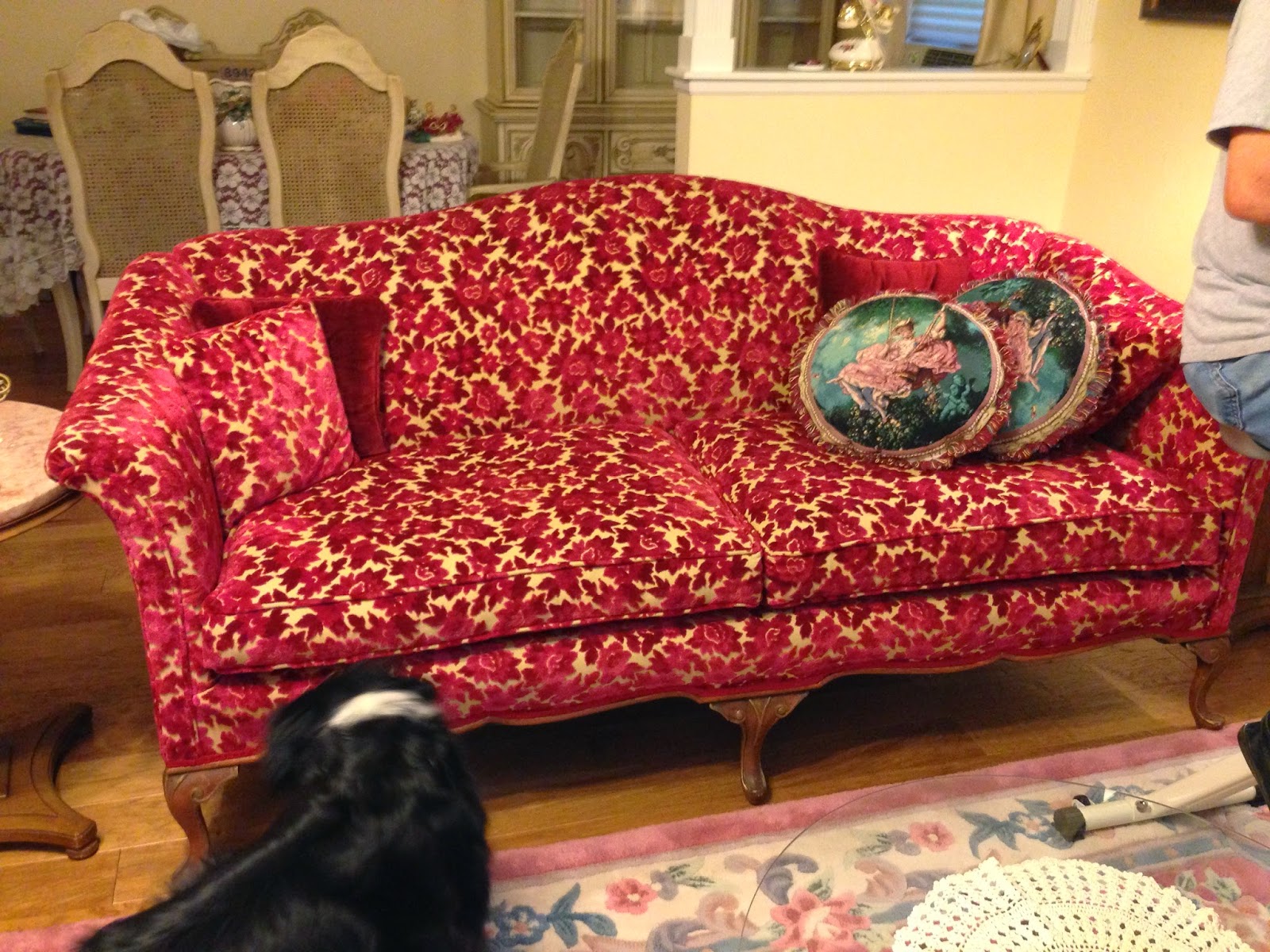 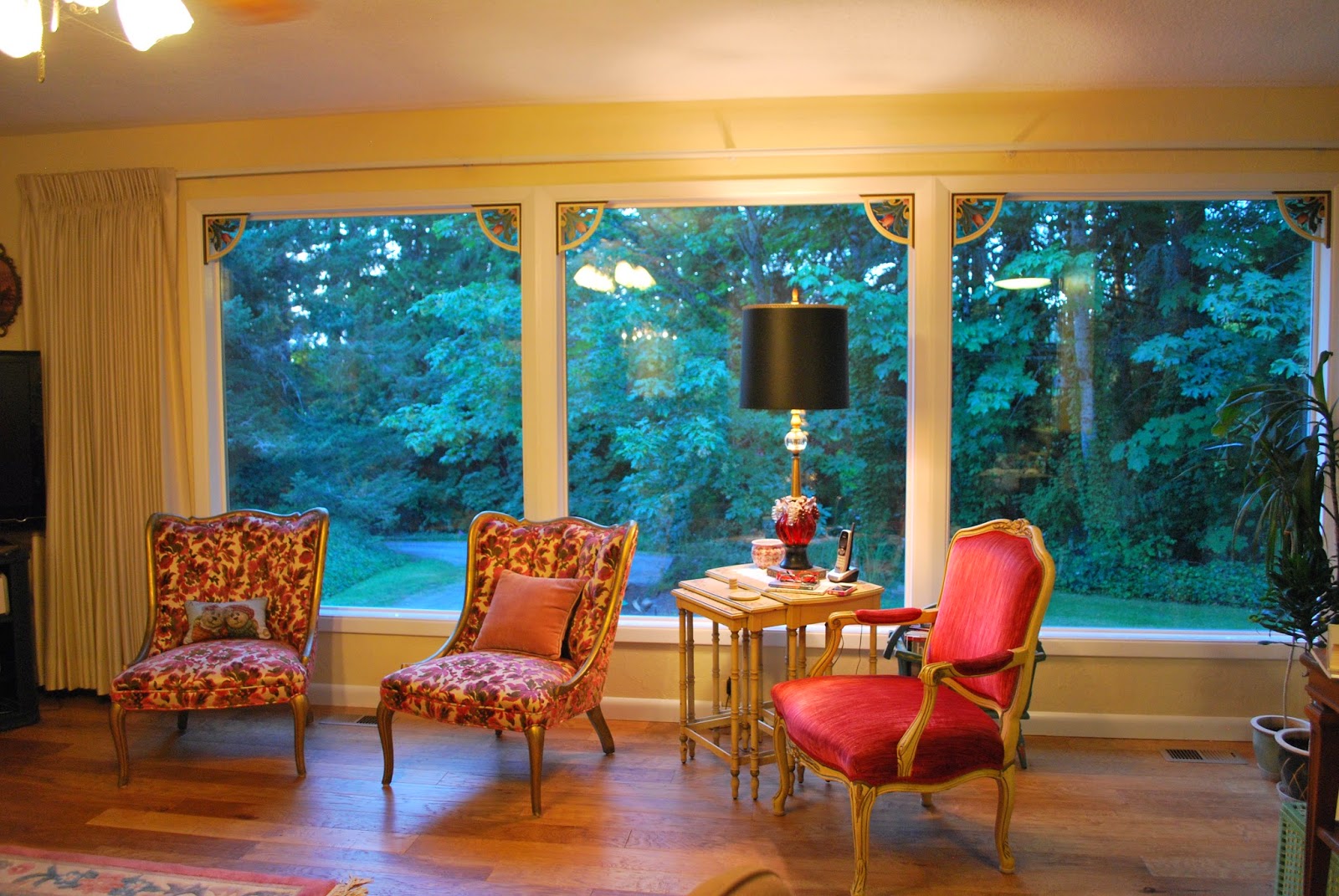 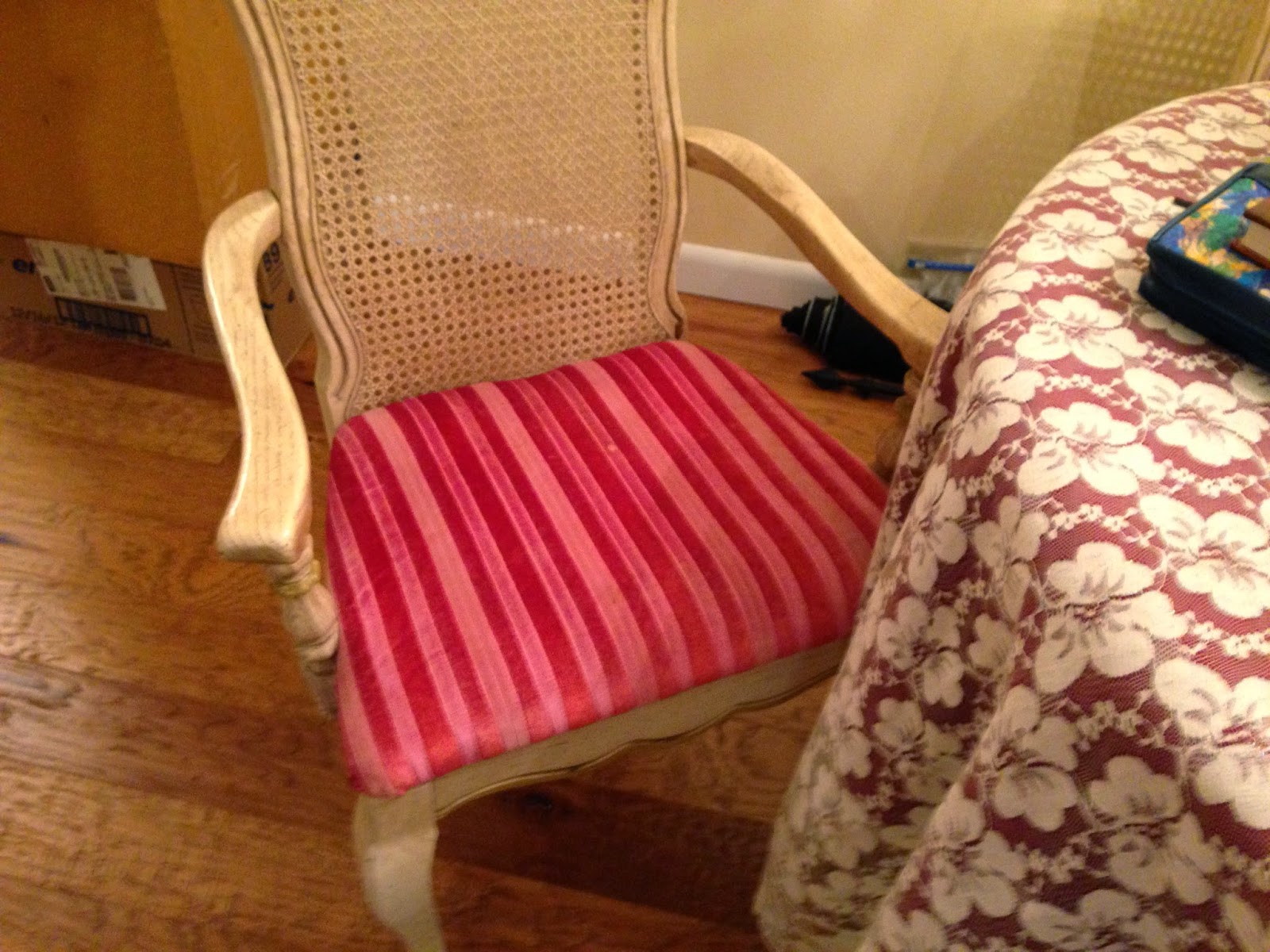 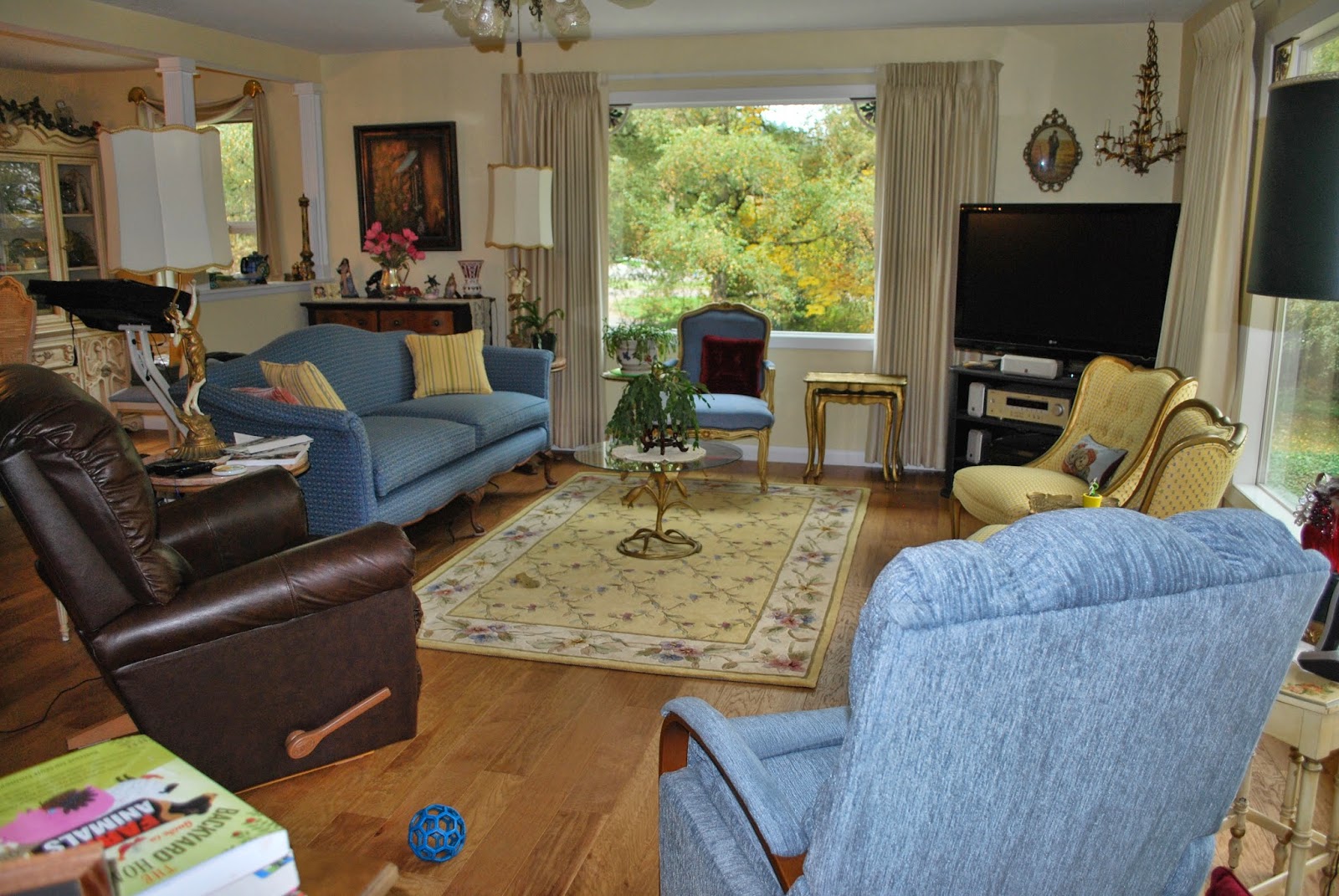 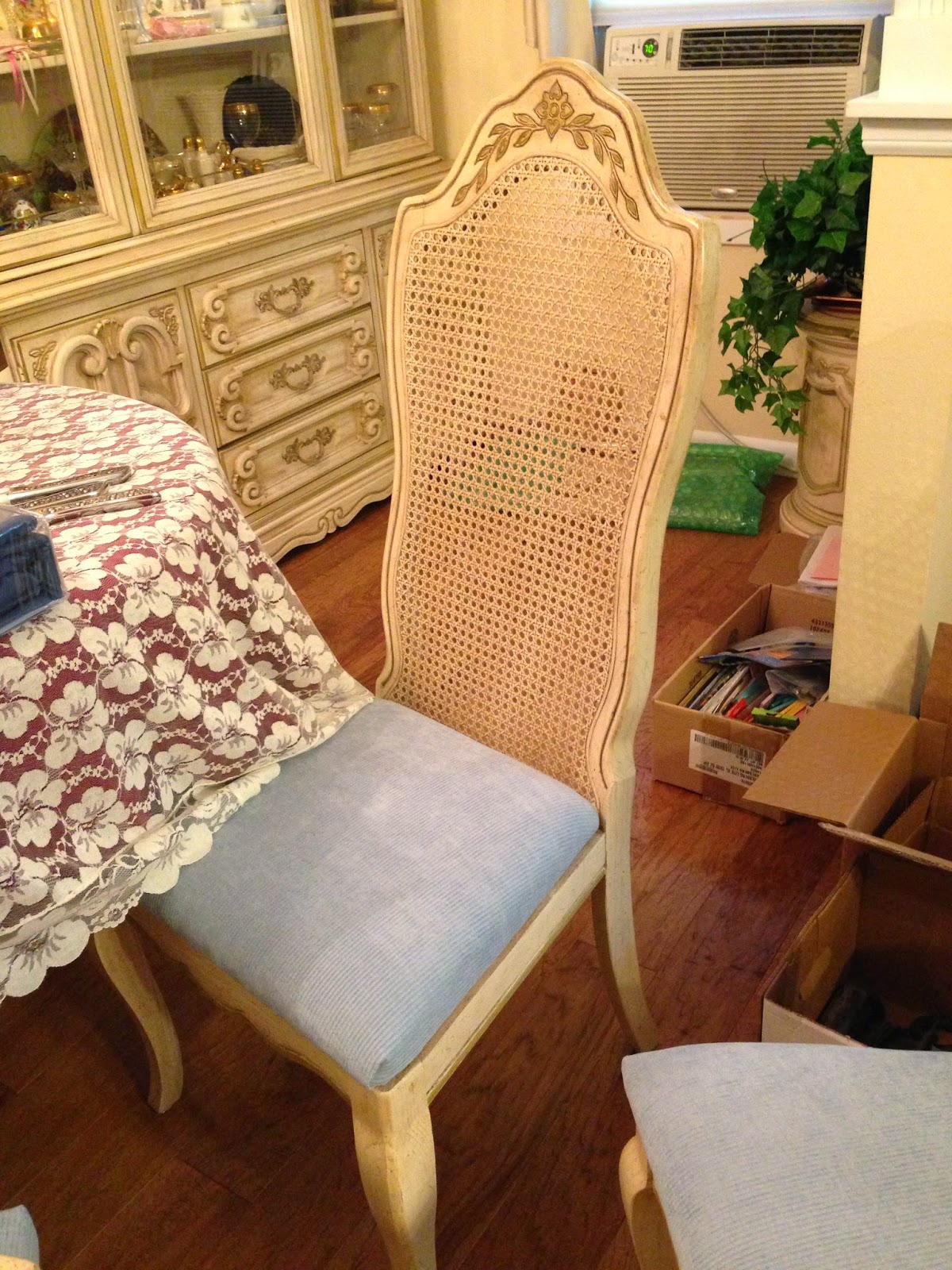 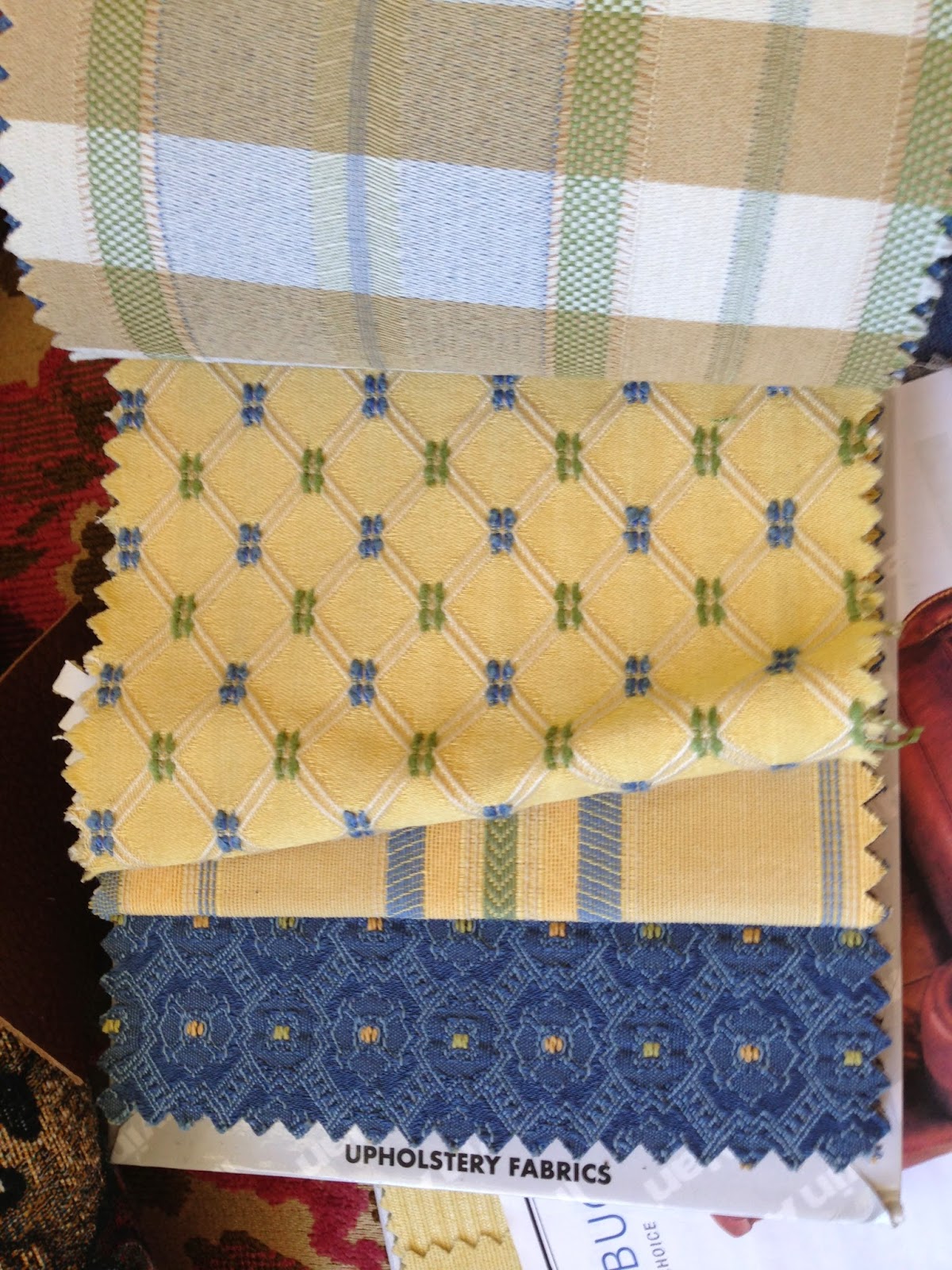 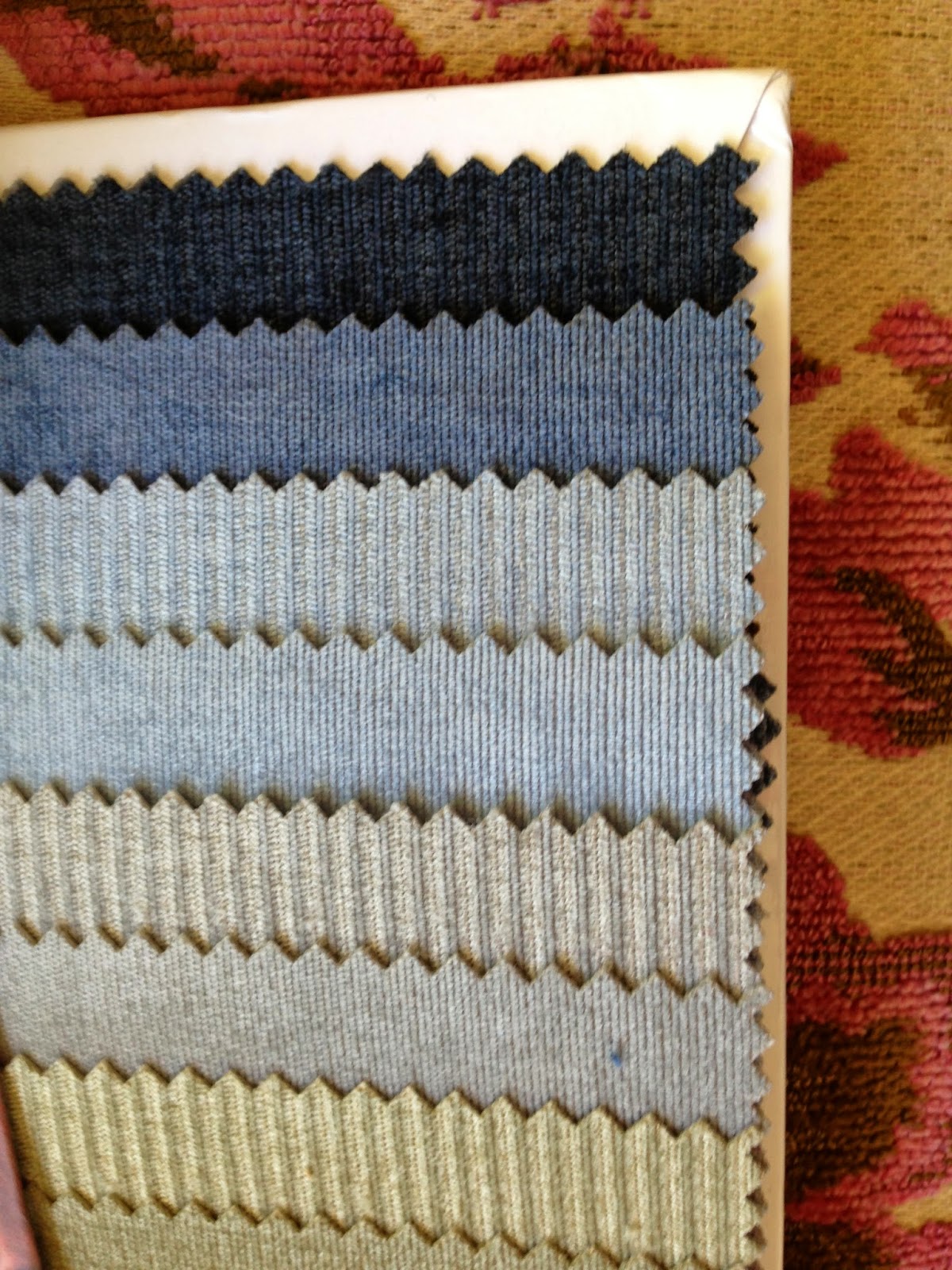 As Thanksgiving approached I realized that my black and white china would look ridiculous with the new dining room set.  So I spent weeks combing Craig's List until I found the perfect replacement.﻿ 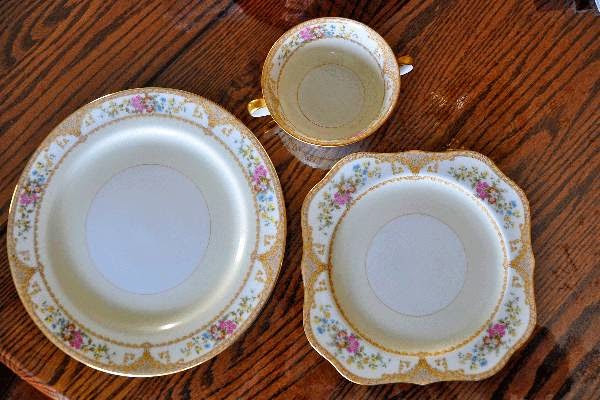 It worked out beautifully. 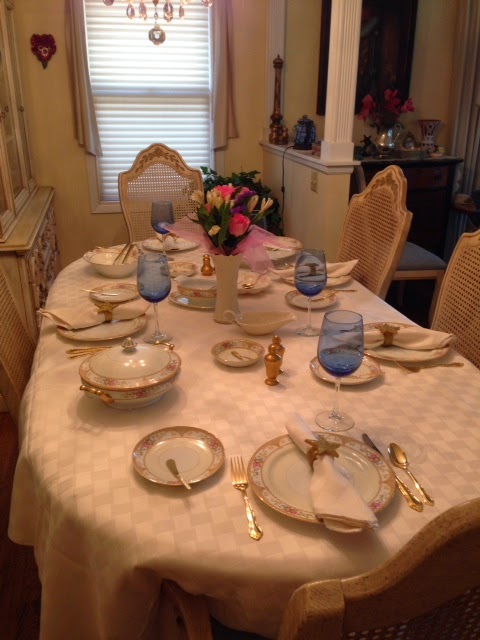 Now a new chicken coop is in the works to house the 8 old hens, the 14 new chicks we bought at the feed store, and the 6 tiny chicks that one of our hens hatched.  No, we do not have a rooster.  We bought 6 fertilized eggs from a friend and slipped them under a broody hen.  She turned out to be an outstanding Mama.  What fun we have had with it.  You would think that we were new parents by the way we have carried on about it.  Everyone in our family has been sent videos of the babies every day! 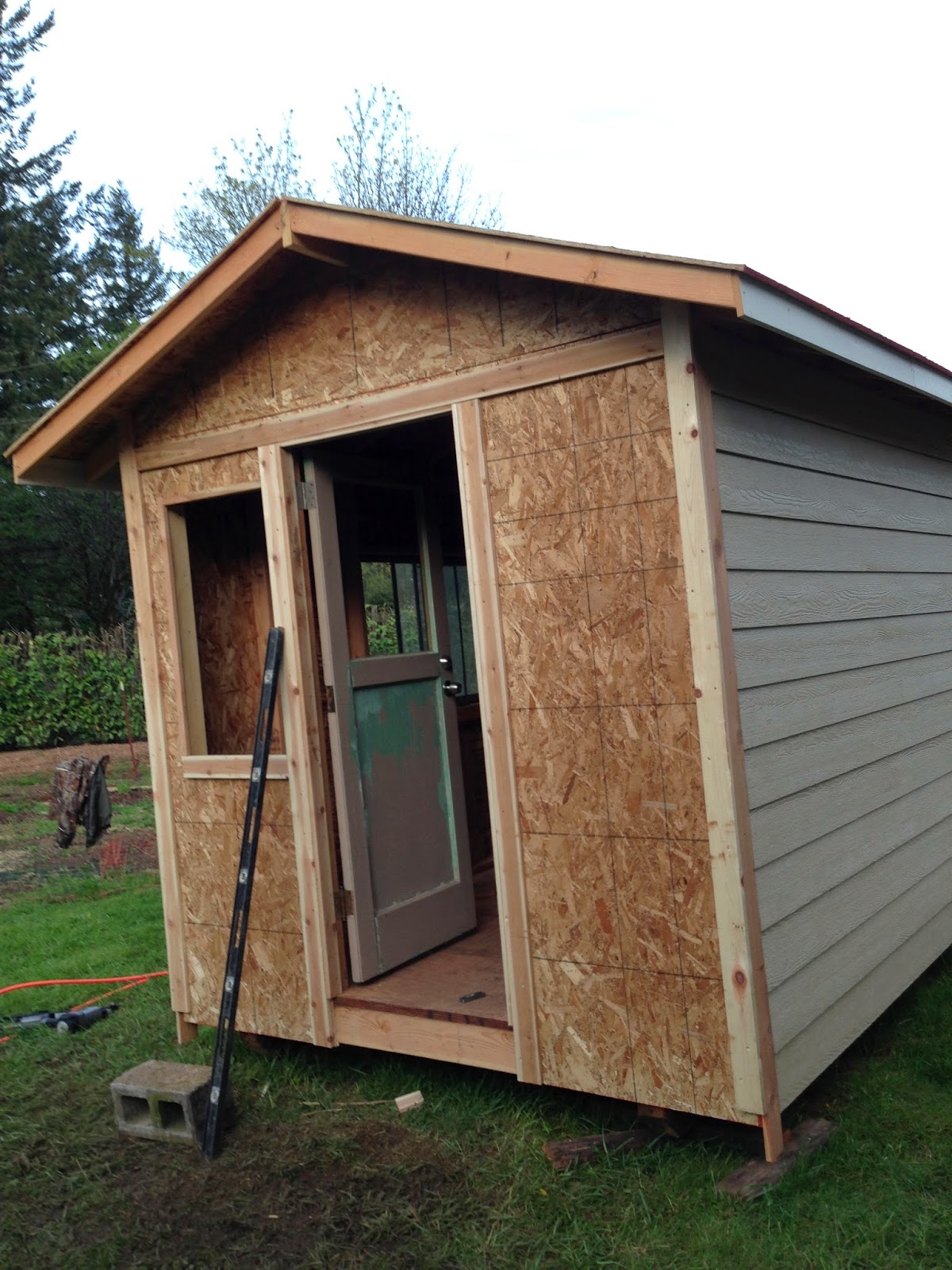 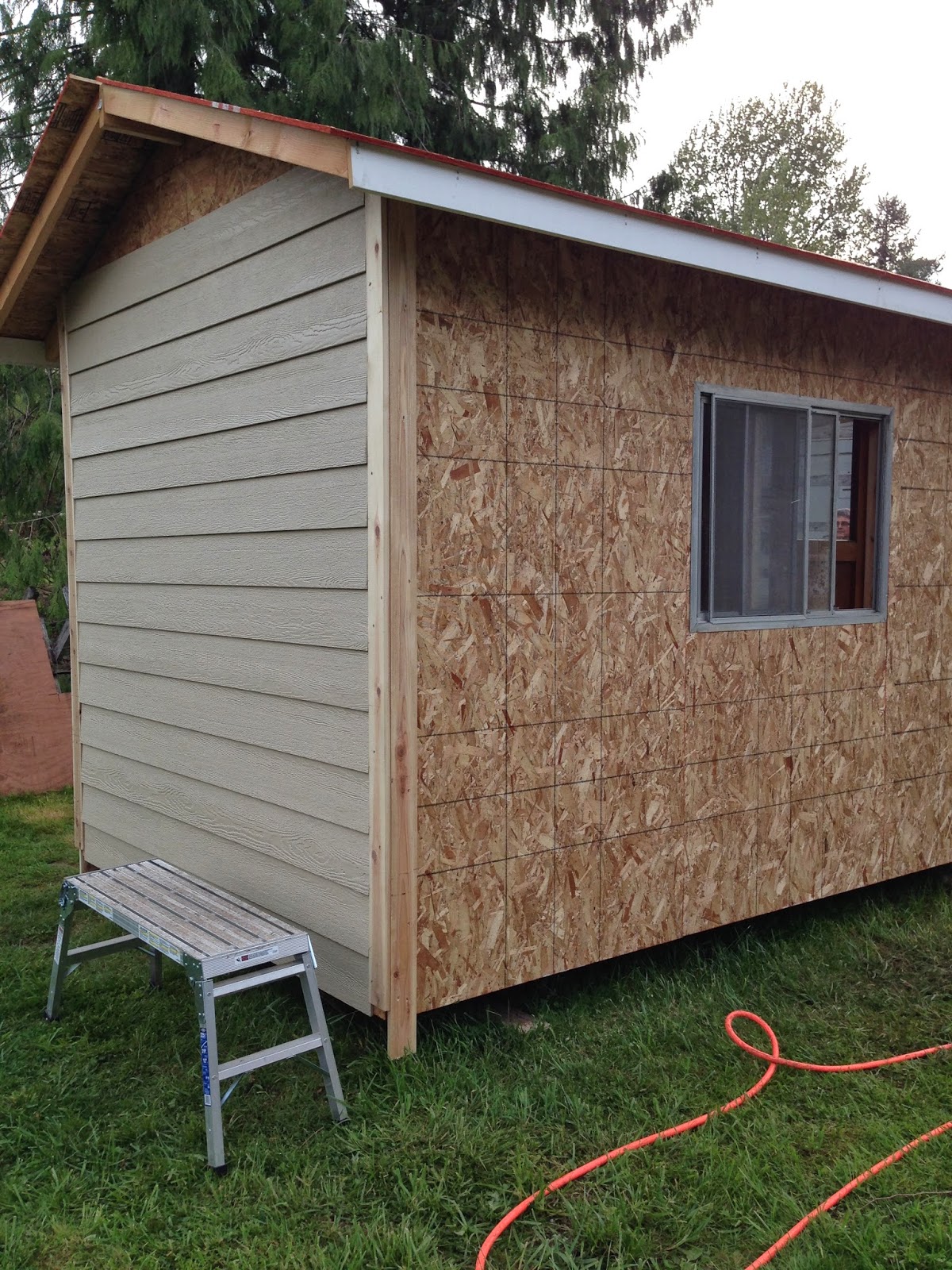 We are really looking forward to summer. There is still so much to do to prepare the land for planting grass.  No grass, no  cows!  As soon as the mud dries out we will begin dragging it with a rake on the tractor and then picking up all the limbs and sticks.  Sadly, I'm afraid it will take us most of the summer, so no cows until next year.
Till next time...
Blessings,
Red﻿ 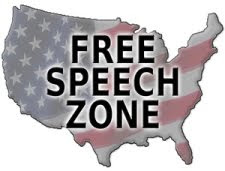 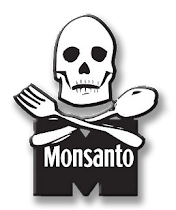 Do You Know What You're Eating? 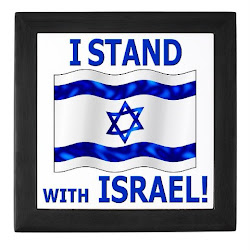 If it takes a village
to raise your child,
you have no business
being a parent.